Market Access and Reimbursement for Innovative Medicines in Europe

On this page, Tilo Mandry, Director International Business Development at the IGES Group, summarizes some of the challenges that innovative pharmaceutical and biotech companies in Europe face in accessing the market with their innovative products.

One focus of his remarks is the challenges that non-European biotech companies regularly experience when trying to enter European markets. These companies are small or medium-sized and often have only a single product. In many cases they have no experience with European markets and the public reimbursement systems of the single European countries.

Although few U.S. biotechnology companies assume that what they have achieved in the U.S. can be directly transferred to Europe, the specific differences within Europe are often underestimated. This is true not only in terms of healthcare systems, which vary from country to country.

Patient care is also quite different in many indications. For example, it is not uncommon for a treatment that is performed on an outpatient basis in Denmark to be regularly performed on an inpatient basis in Germany. Patient and physician preferences and expectations also vary from country to country. Finally, decision-makers often differ: physicians may have a lot of freedom in choosing a therapy or may be strictly bound by medical or economic guidelines. In order to be successful, in-depth knowledge of the respective conditions in a country is required. It must also be taken into account that some countries have a uniform system with little regional variation. This is the case in Germany, for example, while in Italy and Spain regional decision-makers play a major role.

Establish a timetable for penetrating each European market

Developing each European market in Europe in the right order is also critical to success in Europe. Germany and the United Kingdom are typically the markets where drugs are launched first in Europe and are therefore also referred to as "first-launch markets." This is because medicines can be prescribed to insured patients there from the day the marketing authorization is granted at the expense of the public healthcare systems.

Developing each European market in Europe in the right order is also critical to success in Europe.

In France, Italy and Spain, negotiations with the respective health authorities or payers are necessary first, which is why these countries are regularly not "first-launch-countries". However, it should be noted that in France it is possible, under narrow conditions, to reimburse a drug even before it has been approved by way of the so-called ATU procedure (Autorisation Temporaire d'Utilisation). If the ATU procedure is chosen, France is the first-launch country. In Italy or Spain, regional decision-makers have to be involved, so there the reimbursement and thus a broad brand launch can easily be delayed by two years or more.

Consider the specifics of the British and German pharmaceutical markets

It is true that the UK and German markets are regularly the first to be tapped. However, neither market is without its challenges. These markets have traditionally been markets with more liberal pricing. But in the UK, the first thing to consider is that the HTA agency NICE (National Institute for Health And Care Excellence) only covers England. Scotland, Wales and Northern Ireland have their own agencies. In the United Kingdom, many patient access programs require substantial rebates to make a drug "affordable" to government health systems. The United Kingdom has left the European Union, so it also has its own drug approval process, which is the responsibility of the Medicines and Healthcare products Regulatory Agency (MHRA).

In Germany, a very extensive and complex HTA procedure is carried out for new drugs.

In Germany, a very extensive and complex HTA procedure is carried out for new drugs, the so-called AMNOG procedure. It is generally considered to be the most complex European HTA procedure, which in turn is of great importance for many other European countries, as they base their HTA decisions on it. The AMNOG procedure is a benefit assessment conducted by the G-BA, which examines the value of a new drug on the basis of its clinical benefits. In this process, the benefit assessment follows an assessment scale ranging from "no additional benefit" to "significant additional benefit." This procedure is carried out immediately following the market launch in Germany and lasts six months. The subsequent price negotiations between the pharmaceutical company and the German National Association of Statutory Health Insurance Funds (GKV-SV) then take another six months until both parties agree on a negotiated price. If, on the other hand, no agreement is reached after the price negotiations, an arbitration board will decide on the final price three months later (i.e., a total of 15 months after the market launch of the drug in Germany). For the first twelve months, the pharmaceutical entrepreneur is free to set the price.

Within Europe, each European country references other European countries when determining prices. The process is extremely complex. Since not all countries publish prices, list prices are sometimes referenced, although these do not play a major role in practice.

The order of market introduction is decisive for the economic success of a new drug in Europe.

The order of market introduction is decisive for the economic success of a new drug in Europe. Ideally, the market that promises the highest price is chosen first in the hope that this high price will then be used as a reference by the other countries. Since in Germany the pharmaceutical company sets the price for the first year after the market launch, most pharmaceutical companies choose Germany as a "first-launch market", also because of the reference procedure.

To determine which European countries are most promising for the market launch of a new drug, not only population figures and health expenditure per capita should be taken into account. Prevalence, which can vary widely across Europe, and local patient care are important. For example, especially in the case of rare diseases, treatment in some European countries may be concentrated in a few centers, which is an advantage for market development. In other countries, on the other hand, the same disease may not be treated in specialized centers but by physicians in private practice, which makes market penetration more difficult.

Given the complexity of European markets, an emerging biopharma company may think it is better to go the out-licensing or partnership route. However, going it alone as a biotech company for just one product in Europe may well be the right decision. In the past few years, some companies, mainly from the orphan drug sector, have chosen the path of going it alone. This has certainly paid off for them. This is because, especially in the area of rare diseases, treatment takes place in only a few centers, so a large sales force is not necessary. The company itself (and not a local partner) can maintain contact with doctors and patients and thus gain direct experience of treatment with the drug in European practice. And finally, such a stand-alone approach also lays the foundation for the company's own organic growth in Europe. Further products can be marketed gradually, either from the company's own pipeline or products from the research of another biotech company.

After the U.S., Europe is the largest pharmaceutical market in the world, but the region is much more challenging than the U.S. in terms of market entry and patient access because, despite centralized approval by the European Medicines Agency (EMA), conditions in each member state determine the picture. Understanding and managing European market entry requirements is particularly challenging for companies without a presence in Europe or at least solid experience with conditions in Europe.

Many non-European companies fail to engage with European reimbursement authorities and payers in a timely manner, and also fail to contact European key opinion leaders in a timely manner. However, Europe should be considered at the latest when planning pivotal clinical trials and contact should be made. The design of the clinical studies must be such that it can optimally meet European needs. It is true that many biotechnology companies from North America make early contact with the European Medicines Agency (EMA), which is responsible for the central approval process. However, they often fail to contact the country-specific HTA authorities (the Gemeinsamer Bundesausschuss [G-BA] in Germany, the HAS in France, or NICE in England) to clarify the key requirements for the ideal clinical trial design for the HTA process. Because if the study design is not suitable from the outset to meet the requirements of the HTA authorities, then the HTA authority will not certify an advantage for the innovative drug. This in turn will make it almost impossible to achieve a price for the drug that is higher than the price of the standard medication.

Careful analysis of the competitive and pricing environment

Non-European biotechnology companies often have little experience with European prices. This leads to unrealistic price expectations. Drug prices in Europe tend to be lower than in the U.S., but there are variations. Within Europe, drug prices are equally heterogeneous. Therefore, a careful price and competition analysis is recommended. Many factors play a role in the price and competition analysis, such as whether the drug is used predominantly in the outpatient or inpatient setting, the number of patients within each indication, and of course the ratios within each European market. It may well come as a surprise that, for example, in the field of orphan drugs, a product can achieve prices that are not significantly lower than the prices in the USA.

IGES Pharma provides comprehensive advice on all aspects of market access and reimbursement for innovative medicines in Europe.

If you would like information on this topic and our work in this area, please feel free to contact me.

Tilo Mandry is responsible for international business development at IGES Group. He supports international companies in accessing European markets. Tilo Mandry has many years of experience in the life science and high-tech industry. His main focus is on digital health, innovative drugs for rare diseases and innovative medical technologies. He is a fully qualified lawyer and holds a doctorate in the field of pharmaceutical law (from the Research Center for Pharmaceutical Law at the University of Marburg), as well as a Master of Laws from Vanderbilt University in the USA with a research focus on phamarcogenomics.

THE EUROPEAN PHARMACEUTICAL MARKETS AT A GLANCE

Our 65-page guide “Reimbursement and Pricing of Pharmaceuticals in Europe” provides an overview of European pharmaceutical markets and explains the current regulatory, pricing and reimbursement systems of the five largest European countries: Germany, France, Italy, the United Kingdom and Spain.

If you would like a copy of the guide, please email Ms. Agata Daroszewska. 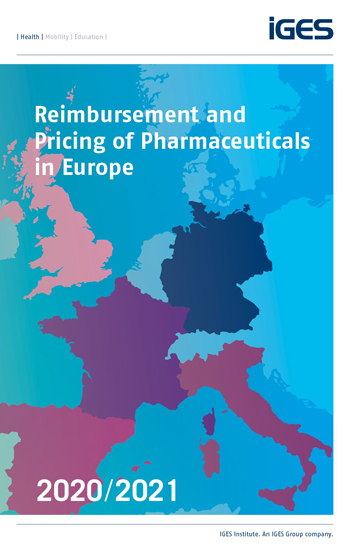